Earlier this December I found a gift wrapped present from a friend in my room. Not thinking much of the implications on what this could mean, I opened it immediately to my delight a handicraft of one of my old fandoms. 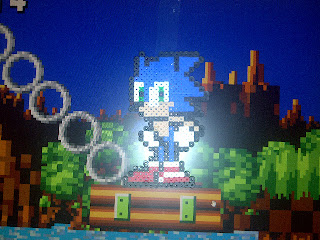 After receiving this gesture, I knew the next time I had met with her I would have to thank her! But thanks to my rusty Holiday spirits (it's been years since I received any sort of Christmas present), when she discovered I had already opened it she chided me that I was supposed to open it on Christmas! D'oh! I should've done the math! Present+Close to December 25th=Christmas Present. I'm out of practice! I promptly put the handicraft back in its gift wrap and waited to (re)open it on Christmas.

After this discovery, I figure the only way to respond was an artistic creation of my own. So I busted out Maya and made an animation based on the kind of things she created.

I actually wanted every single bead to explode outward from the point of impact once Harley hit the words but my computer couldn't handle all those dynamics so I had to settle for a bright white flash. Maybe next time! 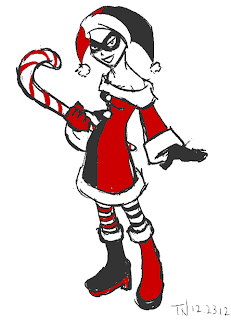 Thanks for the present!
Posted by Unknown at 11:11 AM No comments:

Melted My Brainy and About to be Insaney 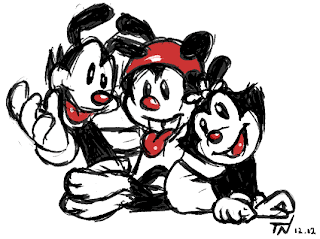 After some months of wracking my brain over math equations and dabbling into a scripting language, my brain's beat! Hope I have some artistic juices to last me for a while! ZBrush here I come, you're gonna be my company for the upcoming Holiday break!
Posted by Unknown at 1:19 AM No comments:

I got a soft spot for that Horace Horsecollar. Horace was a character in the early black and white Mickey cartoons and he played second fiddle to Mickey. However, as time went on, Mickey started playing second fiddle to Donald and Goofy, and Horace was eventually phased out, so when I see Horace in more recent cartoons like House of Mouse I feel like they forget some of his aspects (he neighs every time he laughs, which he did a lot in the old cartoons, he's very strong and did a lot of strongman stunts, and he's got quite a dashing set of teeth for a smile that he displays quite often). He is also the boyfriend of Clarabelle Cow who's also similarly obscure but more well known as one of Goofy's recent love interests, a concept I never bought because

1. Clarabelle and Horace have been paired in almost all their appearance in the old shorts.
2. I don't like the need to shoehorn in a love interest for Goofy just because Mickey and Donald have one.

These two shorts in particular feature Horace heavily, Camping Out especially where he was pretty much the main character:
A few of my favorite shorts with Horace:

Admittedly, he was a boring character, but I got a soft spot for him. Someone who the world used to know as one of Mickey's pals but Mickey would later become an American icon and Horace would become... well, forgotten.
Posted by Unknown at 9:11 PM No comments: 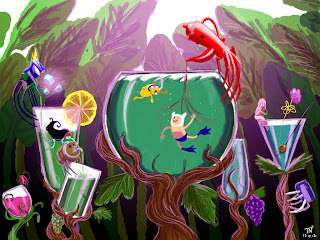 I just recently finished watching season 1 of Adventure Time. It's awesome! I love watching fantastical creatures doing what is normal for them and some of the dark comedy that makes me question if I should be laughing or sad! Every time you say "what" we'll kill an old lady!
Posted by Unknown at 1:25 AM No comments: 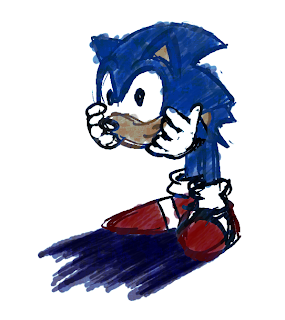 Sometimes I don't know why I draw what I draw!
Posted by Unknown at 11:04 PM No comments:

Once upon a time I once took on a fangame project called MegaGoat. I believed I worked on this back in 2003 or 2004. You can check it out at TwinSky Games if you feel the urge to play this magnificent title.
I think my logic at the time of working on this project was that I was a huge Mega Man fan at the time and the best way to get your hands dirty into making a game was experience, and one of the best ways to learn was to imitate something else just to see if you could do it yourself.
Mail>Weather>Fisher>Muffin>Ice Cream>Mail, the logic being mailmen are supposed to able to weather through any storm to deliver mail, the weather can ruin a fisherman's day and be unable to fish, fish can ruin muffins, I'm not sure how muffins beat ice cream but ice cream can ruin mail.

All those art assets was a lot of work! On top of doing backgrounds, there was a lot of animation work that had to be done. I had never really done animation before so it was kind of daunting!

Some interesting things I remember was Mail Man's stage was supposed to be based off of Paper Boy to an extent and a Grim Reaper enemy was planned for the stage. We also got Retarded Goat Man (a recurring gag with a yellow/purple color scheme in Tim's games), a Paper Man enemy and a Weather Man enemy.

Some generic enemies like the Giant Jumper as are common in Mega Man games were made too. I liked the Frying Pan enemy because it was supposed to be like those birds in Airman's stage and we wanted to play on Player expectations where when the egg breaks, a bunch of mini enemies pop out to bombard the Player but instead we'd just have an anticlimactic sunny side up.

Anyway when I was feeling nostalgic about this I recently decided to draw some art based on Mega Goat! 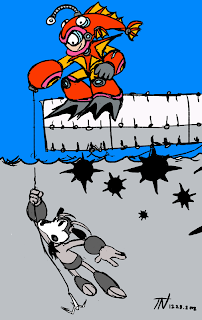 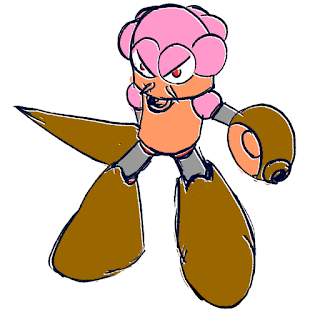 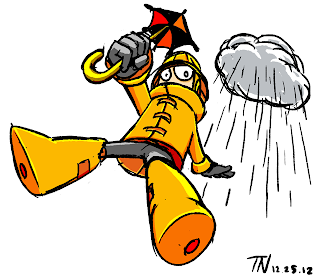 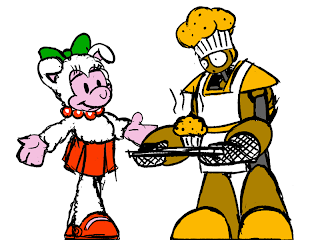 Looking back at it I can totally see how I would draw and shade and animate some things differently. Maybe someday the game will be finished! Kickstarter's all the rage these days isn't it? I hope we'd be protected under parody!

Graced With Your Presence 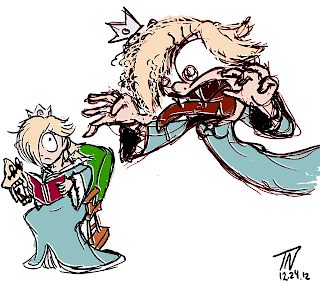 The Mario Galaxy games are great stuff. Everyone should play them!

I recently finished Tales of Graces f, the main campaign anyway. I didn't like it very much. My main issue is the story and how overly dramatic and unbelievably optimistic they are about certain things. Partway throughout the quest, one of the main hero's friends starts doing evil bad things because he's slowly being consumed by an evil spirit (you later learn that said evil spirit has a tragic backstory), and his actions are causing the world to die. The party wants to save their friend without killing him, which is fine and dandy but everyone is always reluctant to fight him because he's their friend and fighting a friend is something that seems to cause a lot of anguish among the party members in this world. His actions are causing everyone else to be miserable like no more water for the desert folks or no heat for the snow folks for pete's sake! This also extends to one of the main characters who has the power to destroy the evil spirit but at the cost of their own life, but everyone is yelling at said character to not do that because they say her self sacrifice won't solve "anything" despite that it would end their problems with evil spirit dude. Eventually everything pans out so that things are conveniently hunky dory and no one has to die, but it feels like there's a lot of forced drama and unrealistic optimism when it comes to solving problems with unknown solutions rather than solving a problem with the solutions they do know, however tragic the known solution may be.

Dungeons are pretty boring to look at and lack personality. There are a couple of dungeon that're supposed to be complex laboratories but they feel overbloated with many rooms and halls that don't seem to serve for any scientific research save for maybe 2 or 3 small rooms in each dungeon, with many rooms looking the same. You'd think laboratories this big would house more than one scientist (there is only one scientist managing one giant laboratory that's supposed to research the problems of an entire city)

There's some cute chemistry between the characters but otherwise the main cast of characters are pretty boring despite their character interactions. The Discoveries are also a neat addition, where you can find many worldly curiosities and it records the discovery in your log and helps flesh out the world with wonders. Associated with the Discoveries are optional skits, which I liked because they fleshed out the characters. One memorable Discovery was a Salt Stone that had a sign that said only people who aren't true to their heart will taste something other than salty about tasting the stone. Everyone has a taste of it and they all think it tastes salty except for Cheria Barnes, who is actually one of the most vocal of the group but has some unreciprocated love for the main character. She tries to hide the fact it doesn't taste salty to her so she doesn't have to feel like a weirdo.